My drawings are part of a year-long project following the end of a relationship. I drew a comic every day to mark the days out of grief and into something else. My work is at the crossroads of comic, memoir, and poetry. The comic explores grief, relationships, love, sex, art-making, and identity after loss. It emphasizes the utility of a low-cost ritual in order to process anguish and transition. 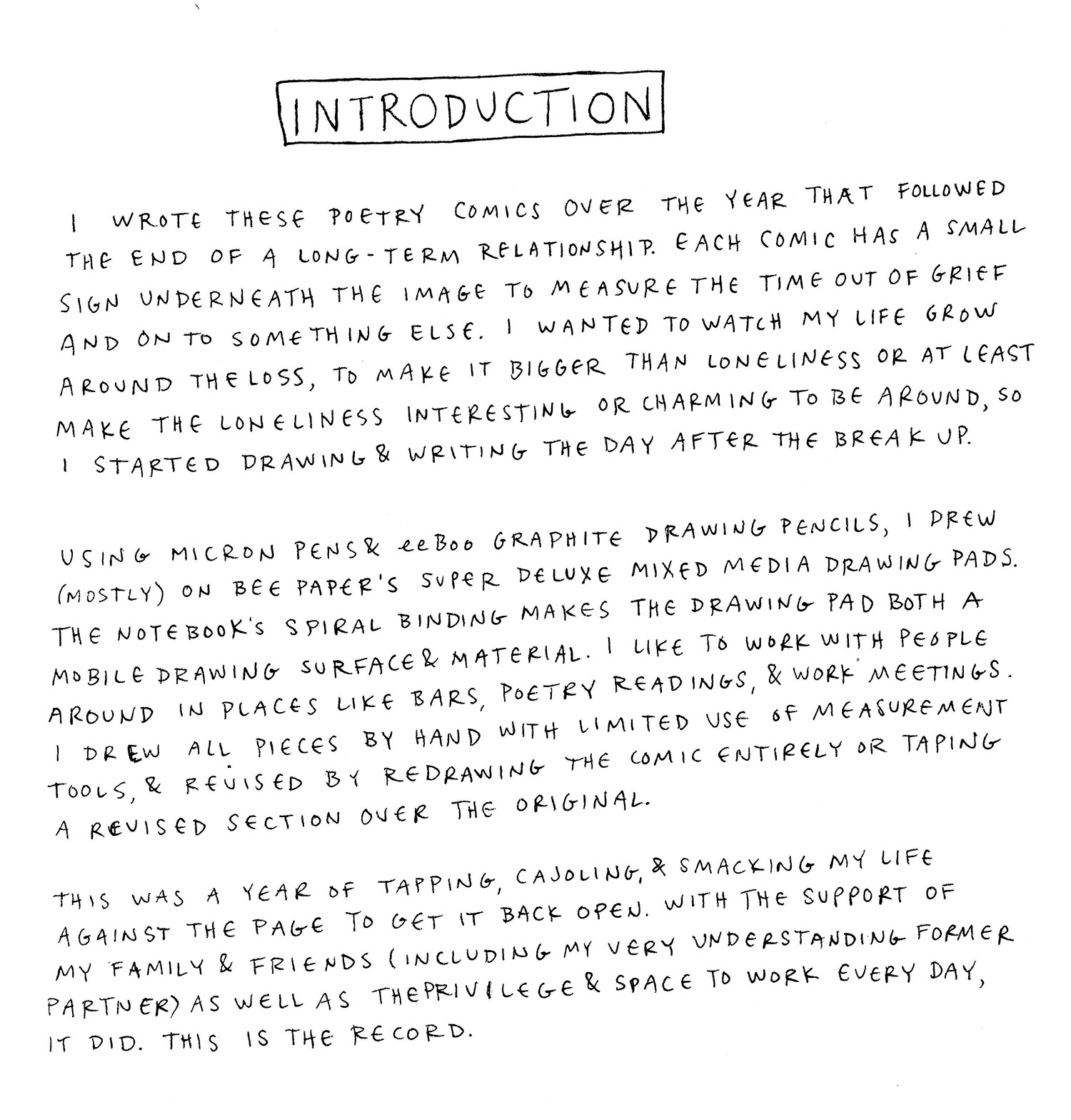 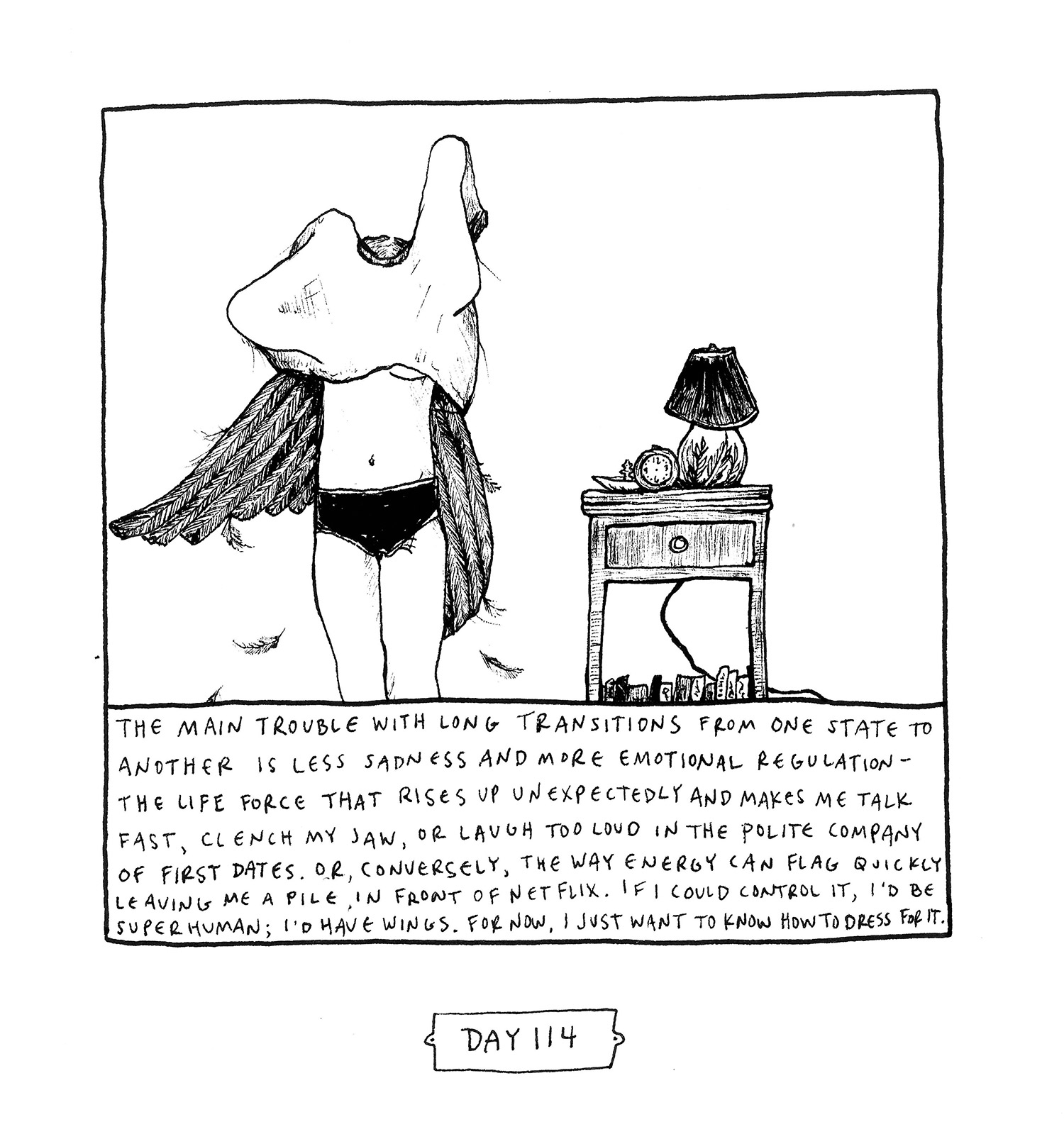 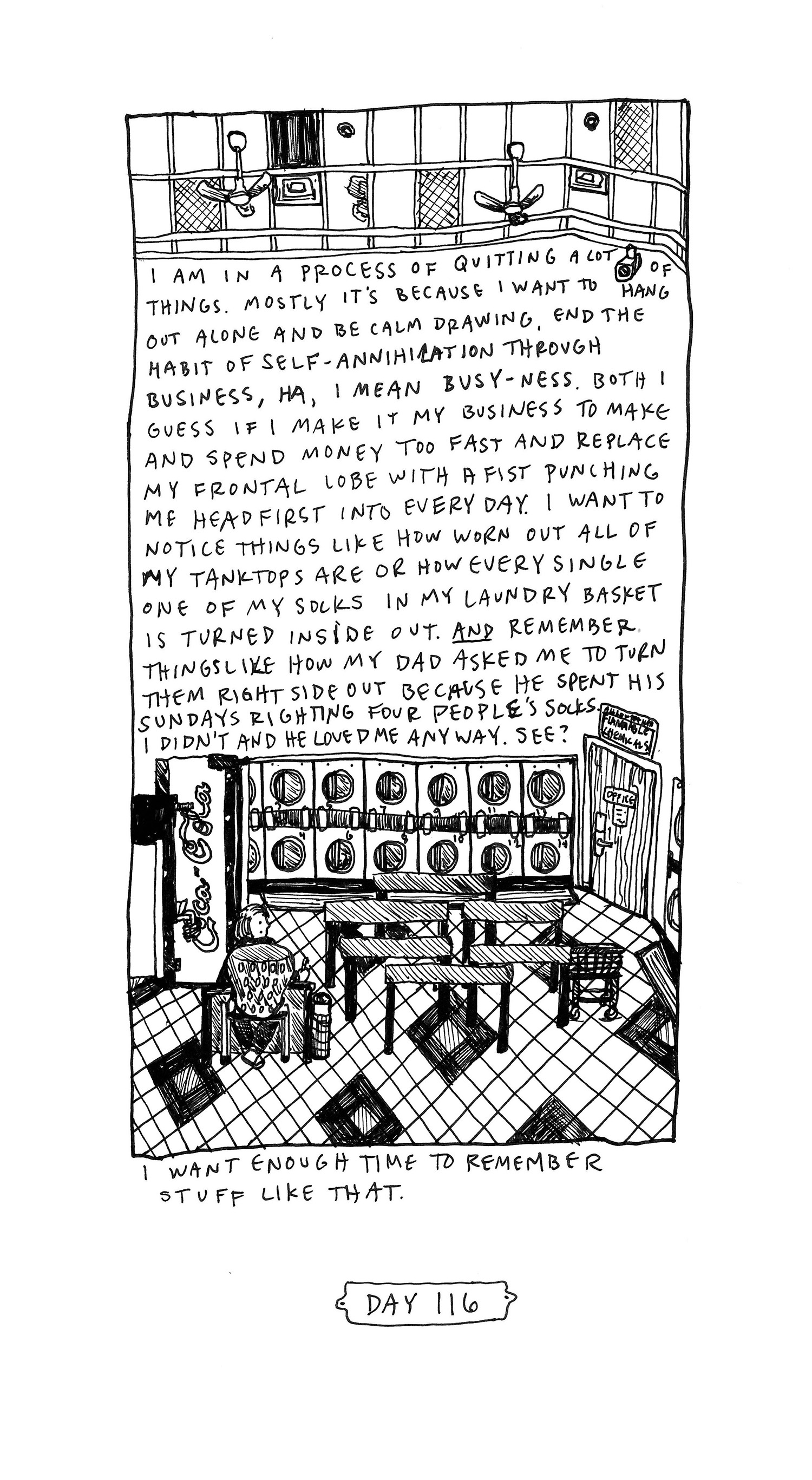 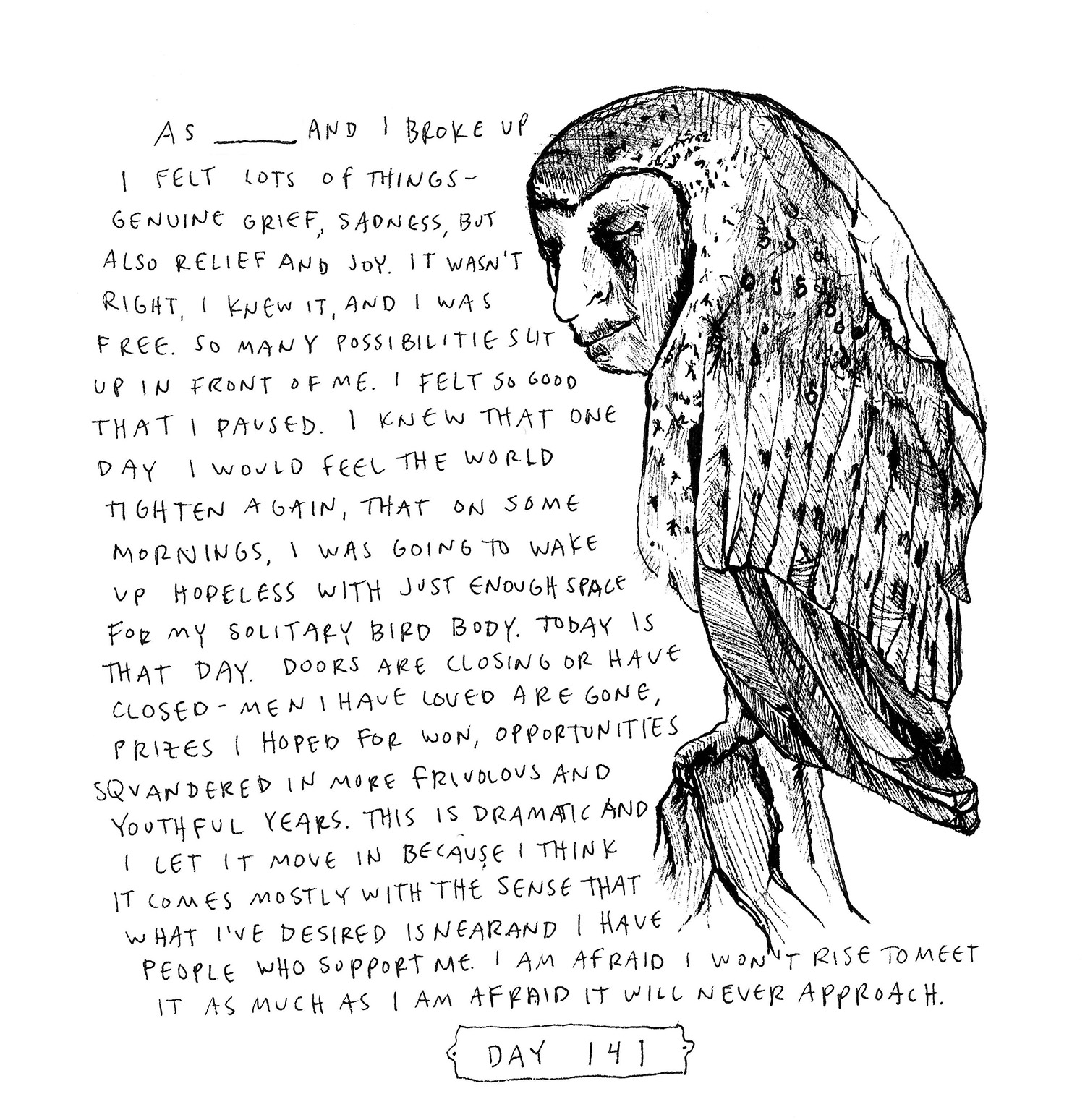 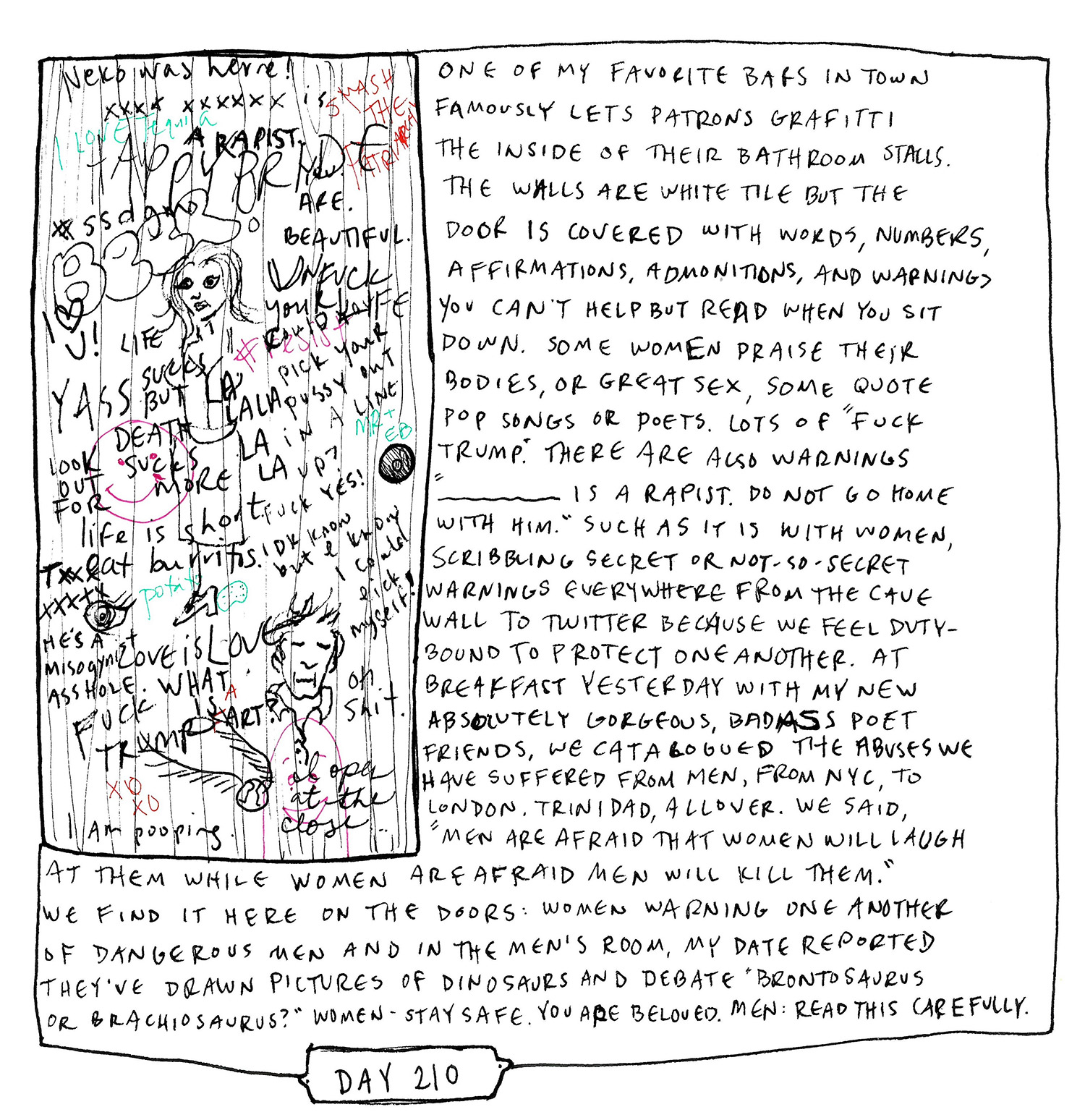 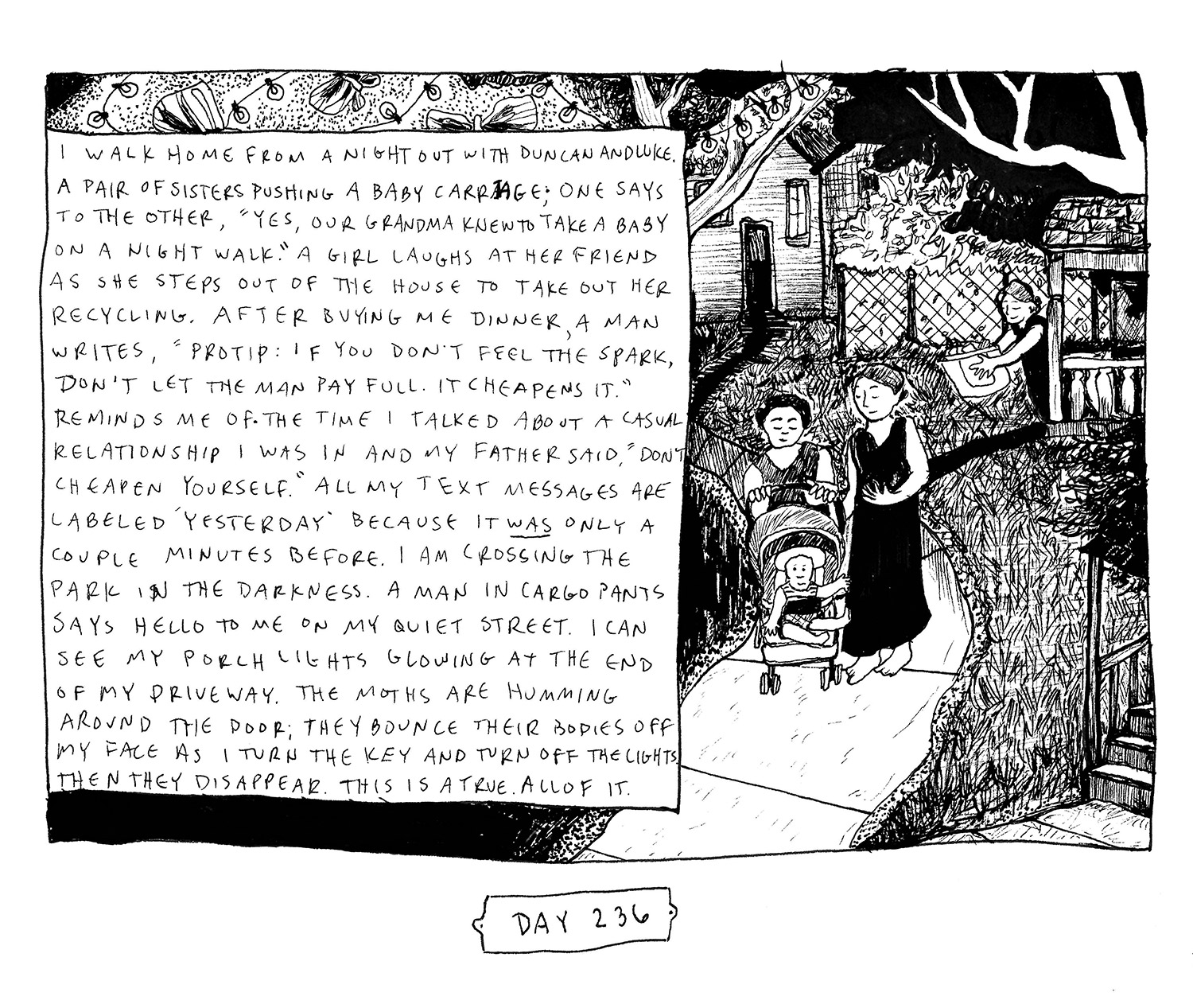 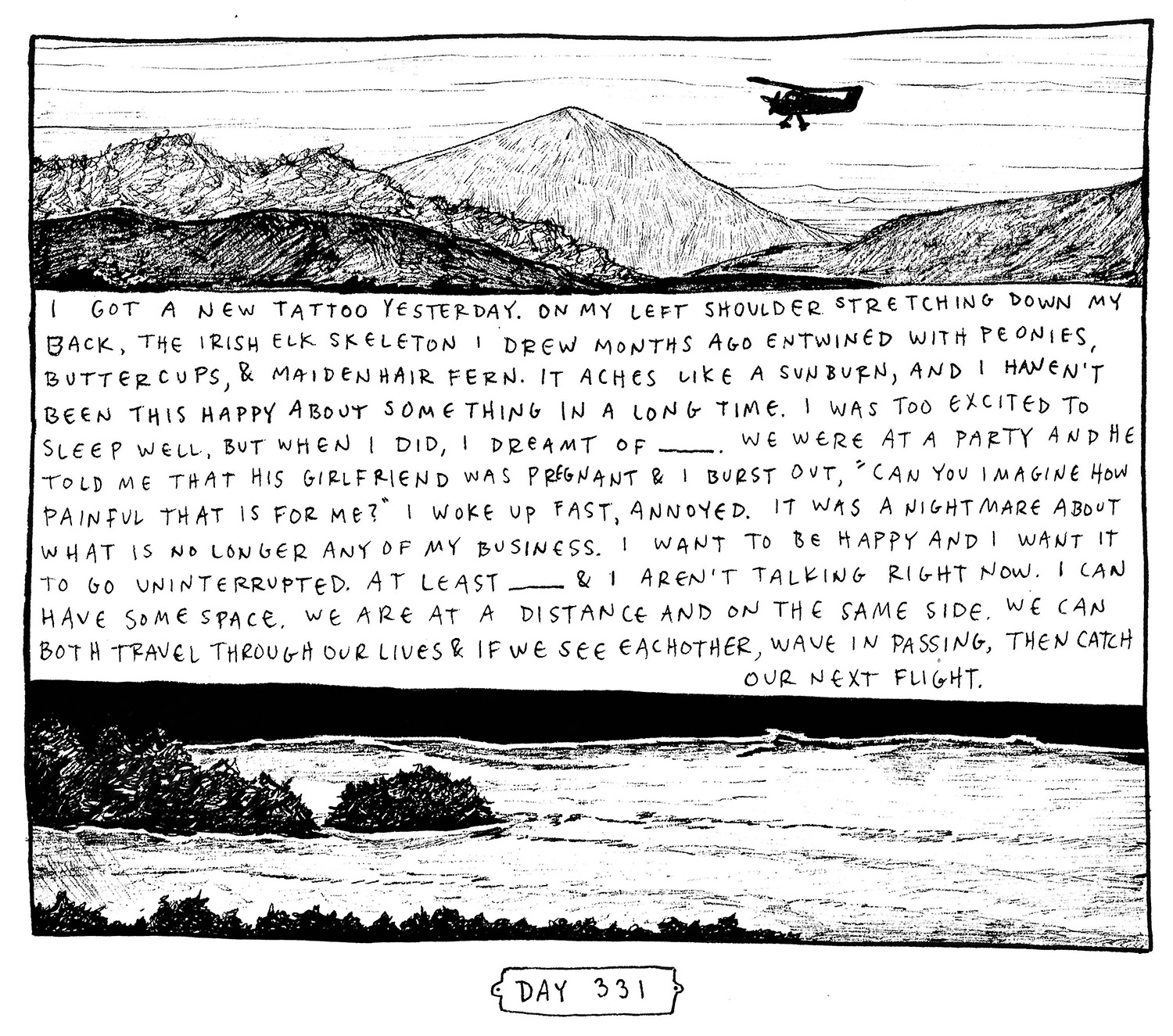 3RD ROCK FROM THE SUN

It was the extraterrestrial Dick Solomon who taught me physics
and eulogy, that a man is a man until he’s a ripple of ether.

At my grandfather’s funeral, the priest had only been acquainted
with Grampi’s illness, the skin tightened over bone,
Parkinson’s that gripped him for a decade,

so he couldn’t eulogize
the rhinestone cowboy who had taught me to swim.

The priest went on about Jesus though I
would have preferred Grampi or Jean Luc-Picard
or even Dick Solomon, a man playing an alien playing a man,
foreign and familiar. It had been years

since Grampi had played anything save
invalid, then dead. He was a story
clicking through a filmstrip of memory, and yet,

Dick taught me that wasn’t all, that a lucent swirl
of my grandfather eddied on the sill, that he powered a spider
to the church’s ceiling where it hovered
over my head as a small, russet crown.

Grampi hung close for a while, clapping furiously
in maple leaves when the man I was seeing
didn’t like to kiss me goodbye or call when he’d promised.
The last thing Grampi had called me was Bacchian,
forest queen, deserving of everything. He is

stretched farther now, out to the Atlantic
into the mouths of gulls. Each time they open birds
to find bellies full of milk caps and Legos,
I’m sorry. I want to feed him potatoes
and chocolate cake or
my own children. My grandfather is

my favorite dead person, though many nice ones
fill the earth’s green slitherings and deserve kindness
on the fresh blades of their faces. The earth is lousy
with our dead, newly alive and burning,
choked with indignities and plastic beads.

When I water the succulents gathered at the kitchen window,
fleshy leaves fashion roots into my grandfather’s ear,
and Grampi inches upwards, listening. I whisper

over him, I will take care of you.
You’re safe to grow,
‍and he lets me lie to him,
practicing for my babies.

NICE WORK IF YOU CAN GET IT

I dream they hire a dead guy at my work. Front desk manager in a sweater vest
that holds his rib cage above his guts.

It is not his deadness that disturbs me. It is how near he stands
when I sit at my computer, how decay pulls back his lips to make him leer.

When I complain to a coworker, she calls him harmless, reminds me
he has centuries of experience. I chronicle his rankest offences
in a shared staff document:

When a new shipment of books arrives,  we remove the paper covers
and place the covers in a box to be recycled. On break I cut them into collages
or paper sculptures of gargoyles. He catches me,

He sorts and keeps some covers for himself, prints of Olympia
or The Rape of Europa. He loves

the other dead men—the white ones though he is
mostly green now. His scent reveals his path around the office

or amongst the stacks, where he’s gone, when he is coming,
overhanging like a clock. When he swaggers, parts of him swing
and threaten to fling into the copier. He takes the good stapler
and makes me beg him to return it.

It’s as though I can’t break off pieces of him to feed to a dog. It’s as though
he doesn’t know that he’s dead. It’s true

that I’ve wept about him, in the shelves or when I learn on Facebook about dead girls
who have no work. Their only work is feeding
their bodies to mites and flies, filling the chambers of themselves with living things.

One night we close the library down, a bathroom stall
that is splattered in blood. He looks as though

he wants to lick the sink clean, but instead threatens
to fire me. I get a rag and clean
until I can see my face in it.

IT HAPPENS WHEN YOU’RE NOT LOOKING

Despite my mother’s protests, I leave the house
on Christmas night to risk what may hide in a Tinder date.
I drive in search of the husband. He’s stayed away too long,
his odor like rust; our affair, the Bermuda triangle. Sometimes
I think he must be off in a cave building his strength,
drinking goat’s milk from a bladder.
In cold winter headlights,
lick-yellow strips of highway, the moon is bearing her face
only half over the bare-shouldered trees. She is a goal post,
a naked bulb in a hotel room. I approach and approach
and she never gains size, only sharpness.
When I reach him,
I want him to open my body like a forest door. Red wine
in a goblet. Glass shoes. Karaoke at a sports bar.
The absence
beside me is like all absences, filled with sweet and invisible chaos.
I’m humming, You’re nobody ‘til somebody loves you. I’ll tell him

to touch the charge of the nobody, explore the landscape,
the viscosity of the nobody like the dark slits in an outlet.
Plenty of blackness on the highway for me to devour.
When I find him, I will pick his bones clean.