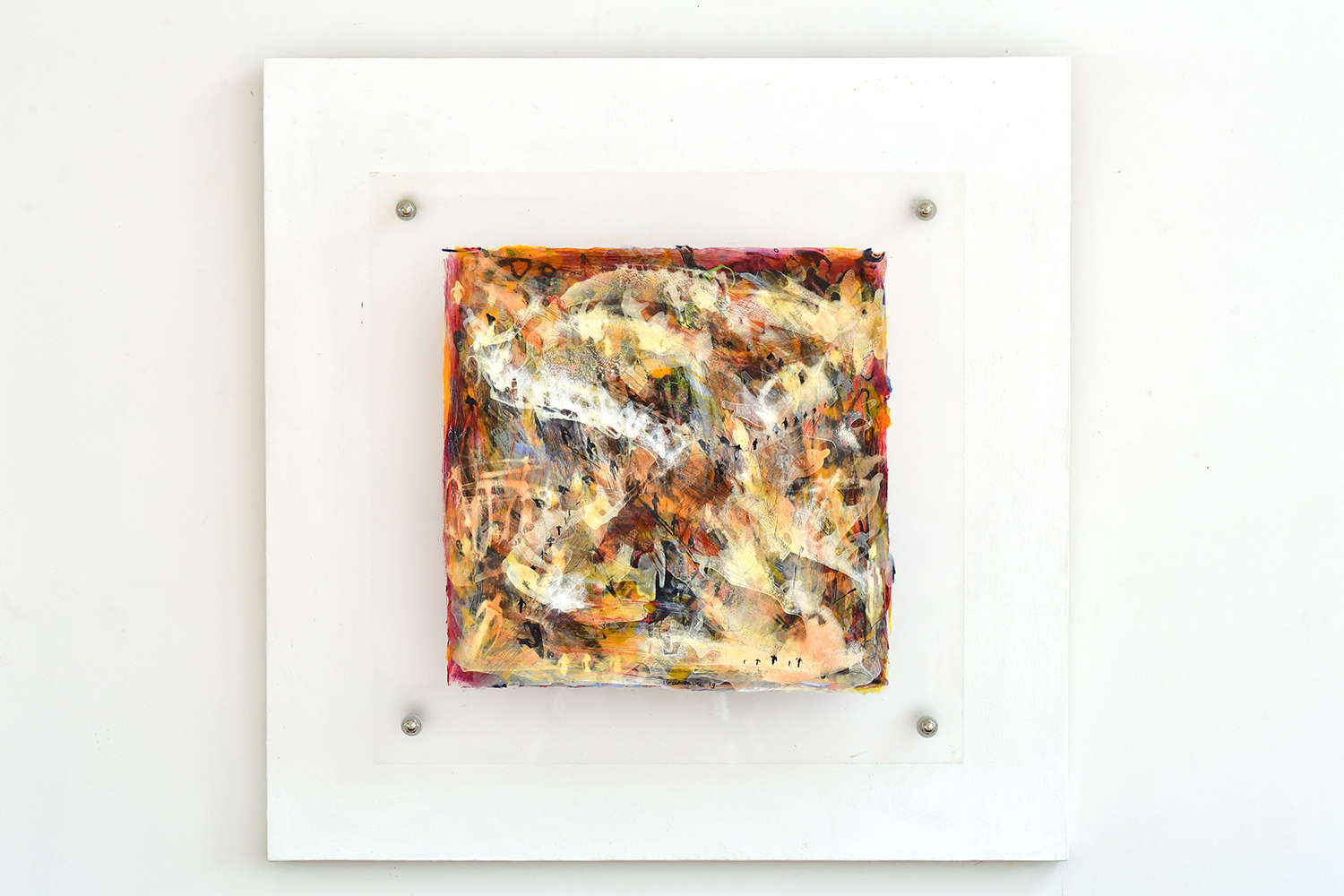 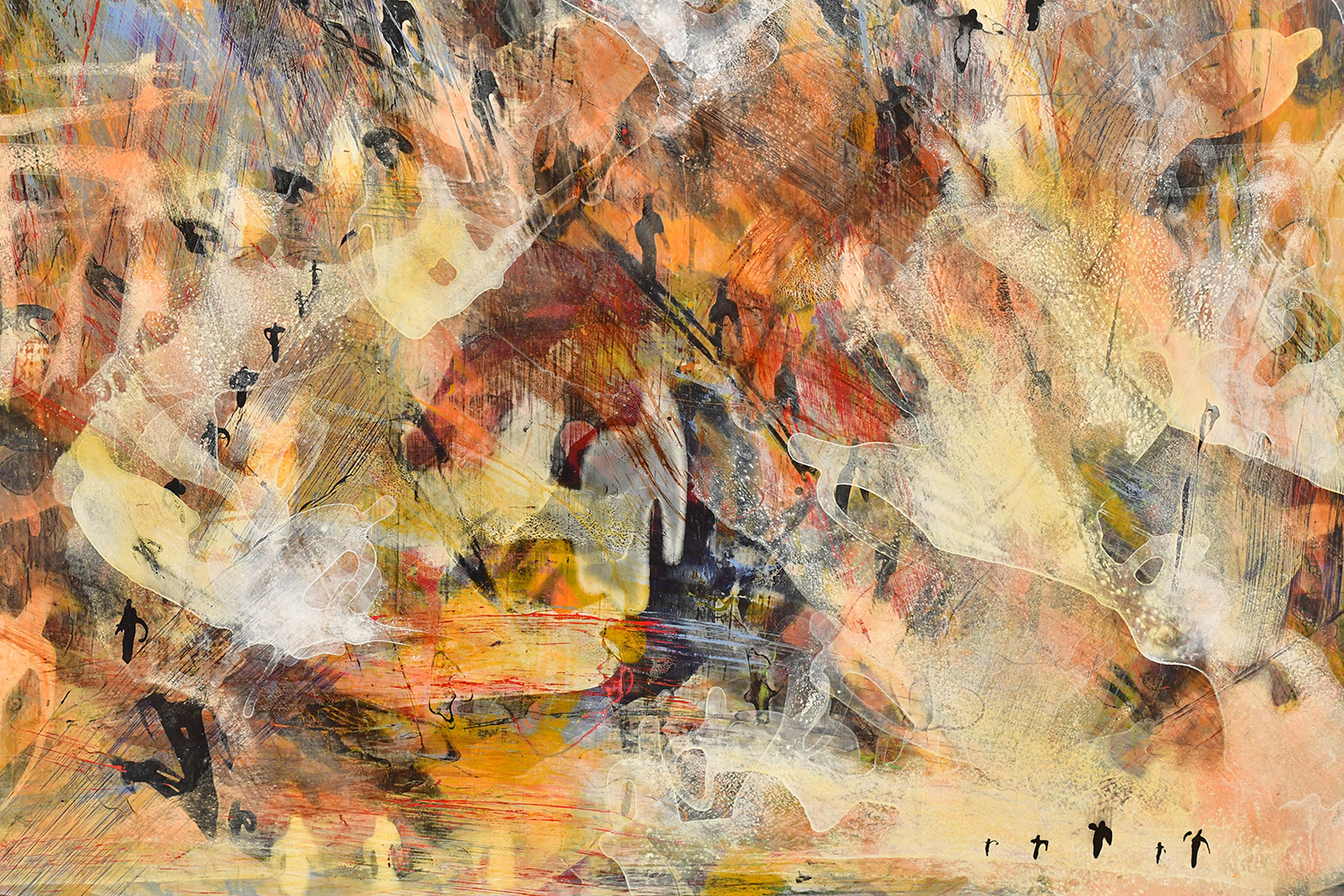 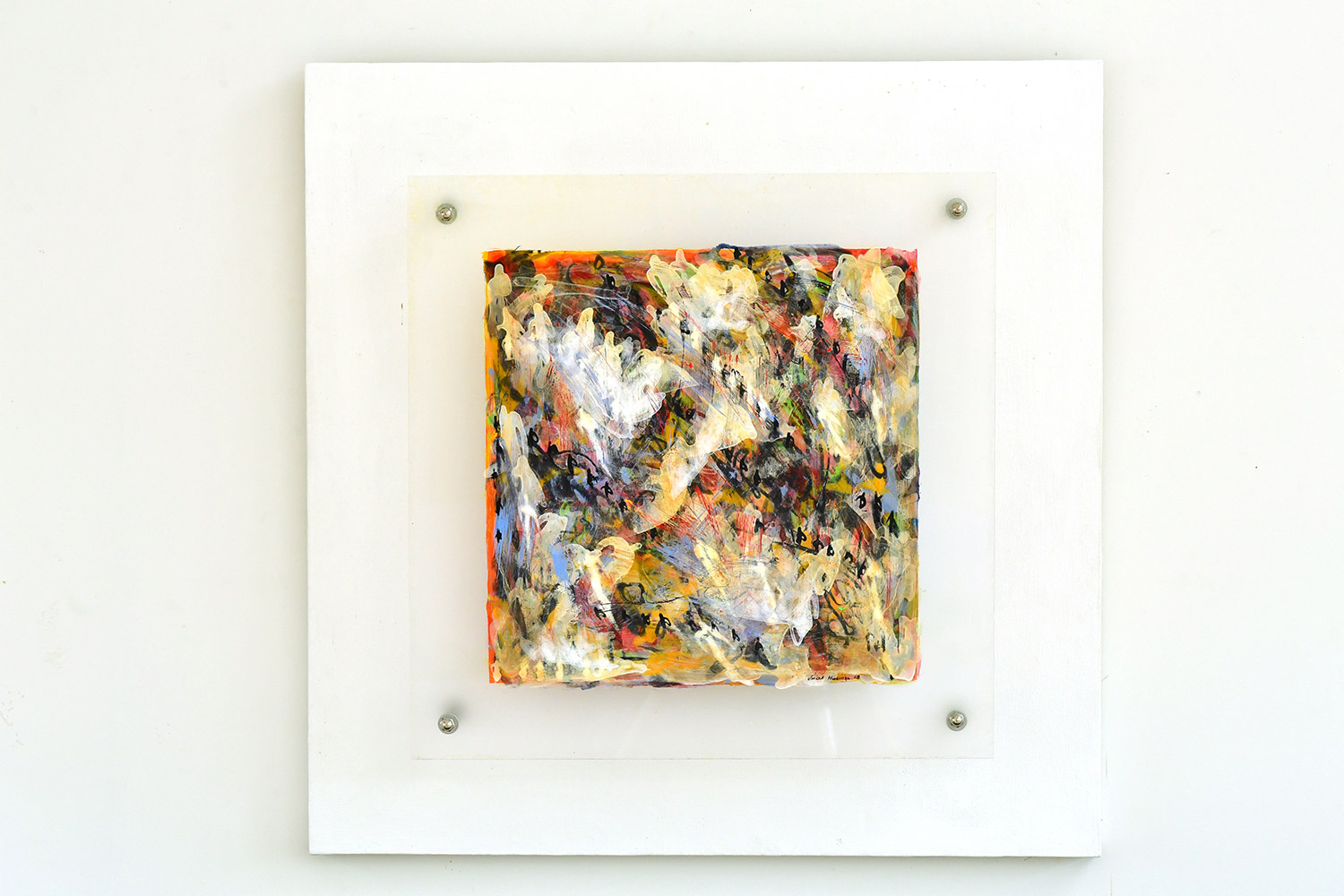 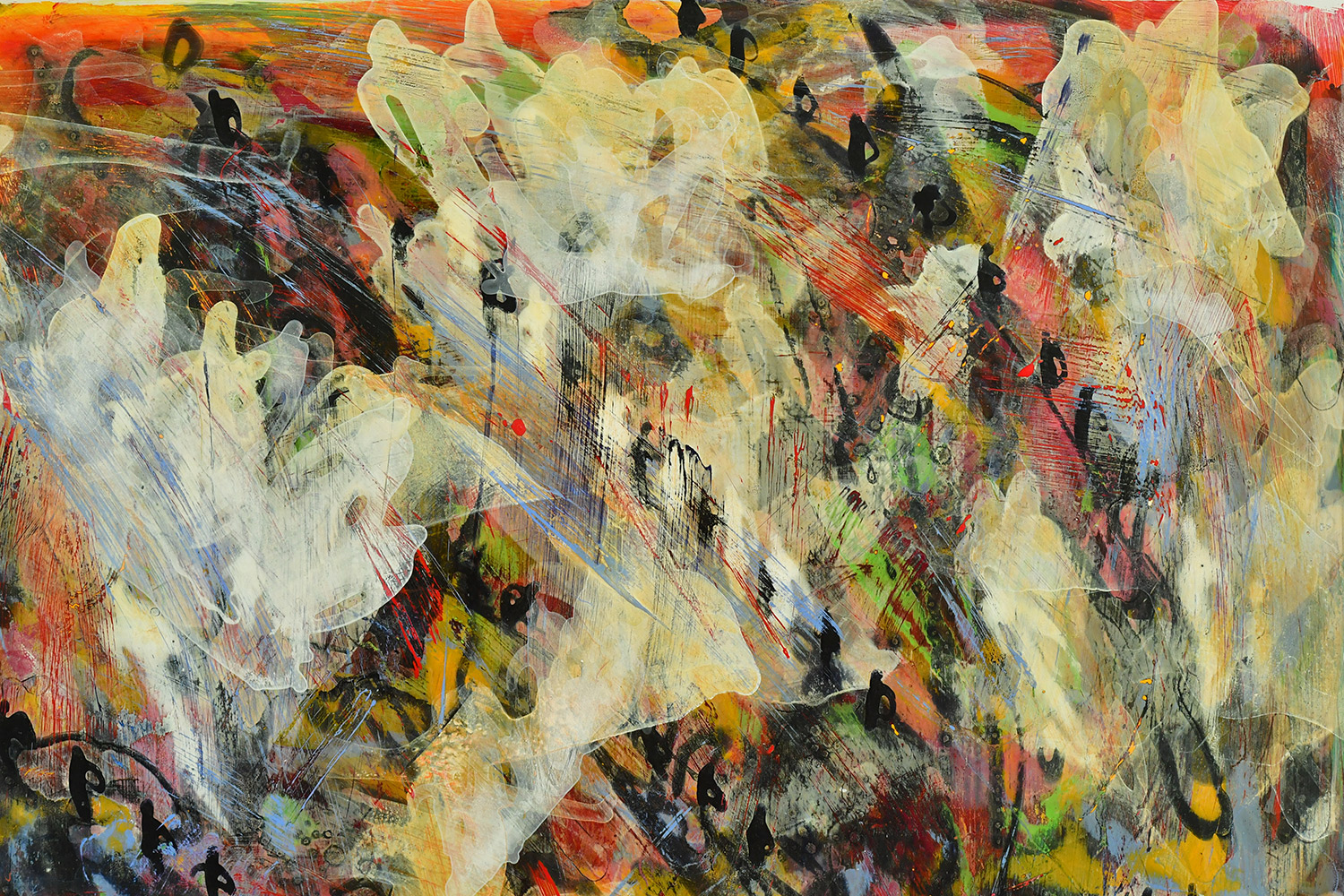 This past weekend, I returned to Sherman. I heard that Vincent began painting again after an eight year hiatus. His last studio was in the ground-floor room of our log cabin in the Los Padres National Forest; now, a studio made in the bedroom loft that I had occupied shortly before leaving for school. Surrounded by windows and beneath the arched ceiling, the loft offers plenty of spatial and spiritual room where Vincent returned to a collection of unfinished paintings, working atop them, adding layers of paint and ink, creating a palimpsest of color and time.

Panes of plexiglass and acrylic paint stack against the far wall in place of the sofa that I slept on for a brief summer. I remember waking up early as the first few streaks of morning light cut through the room, often damp in my own sweat from the retained heat of the previous day—a space akin to a greenhouse. But returning now to find the canvas, plexiglass, paint, varnish, solvent, plywood, and rags in place of the arrangement I lived within during that transitional summer before college is unsurprisingly comforting.

I don’t know why Vincent stopped painting; maybe he had imagined a different life when he came to America in 2006 and we lived in our small apartment in Dana Point. Or that living in the rural mountains introduced a certain isolation that eventually pervaded his relationship to his work. Or he grew tired from his displacement on the West Coast, and later our transition to the East Coast, that left a residual geographic uncertainty. But I have no answer for his reasons, only my own experiences of growing up within a changing landscape.

Vincent was born in the Netherlands where he competed Art school in 1993 before moving to France. There he painted on wall-sized canvas, stacking one atop the other and elevating a center panel from the first to emphasize a recessed border. When he emigrated to America, he decreased his artwork’s scale, painting on plexiglass panes that were mounted and raised a few inches from a square canvas. This brings light not only to the surface of the painting but also to its end, highlighting the intersections of transparent material forms. In this new series, light passes between the gap, leaving a shadow that carries the residue of passing time with earlier layers of paint. While his previous paintings held a sharper edge against the white canvas, the paintings from eight years ago softened their perimeter; the finality of each brushstroke loosened from its alcove within a decisive moment's action, shifting to the interplay of meeting points between edges, one color's contact with another. Now he continues their motion away from sharp lines and decisive borders, the work appearing to hover outwards from its form and towards whomever and whatever might be adjacent. The edges of the paintings meet the opaque texture of the plexiglass' surface in freehand lines, the plexiglass softly framed by the canvas that rests behind the indeterminate perimeter of color at the rising center.

Vincent's paintings have become touchstones that frame my own childhood and teenage years. I remember our time in the Los Padres as a tranformative event: the nestled town of Pine Mountain Club offered an alternative take on my childhood where I could walk from our house on Wildwood Dr. to the town center and into the mountains where my friends had lived; or explore the forests where I began a mythology that renewed with the rhythm of each new day. As I returned from my friend's homes or the woods, I would find Vincent listening to music and working on his paintings in the room accessible around the side of the house. The mountains were a moment of reorientation where we traced the uncertainty of a new and early beginning together. The difficulty of searching for footholds between our newly entwined lives was a disorienting experience as we both moved through tangible and intangible milestones. But these are the motions. I think that as the sediment settled and Vincent and I developed different relationships with this East Coast landscape, he has found an opening to return to his painting and likewise, revisit the past. His latest paintings hark back to the similar technique he explored in France and California but develop an altogether new mood: a vibrant life of color in warm hues beneath the milky white shapes, contrasted by a vacuum of black paint that resembles familiar forms of a different time. The very first layers of paint, some of which were lain eight years ago, are met again through the uppermost layers in this in-between space, where a cacophony of colors merge into monochrome hue—a tension that I think can only be articulated by something left in a different history revisited and reworked in conversation.   
  
I have lived near Vincent's paintings for many years and they have become a fact of the day through their very proximity; just as I move through each day, his work would be hanging on the wall or lying flat in his studio as he worked through the process of a new piece. Looking at them now, I see his paintings navigate through the relationship between lines that are not immediately visible, that shift between plexiglass and canvas. These lines arise along both the painting’s edge and the plexiglass but transpose onto and into the paint as well as perimeters that are neither here nor there, but within a moving field. I am drawn to their invisible lines whose perimeter offers an absence and I think that in these spaces of overlapping paint a certain liveliness is found, a life that resonates in-between the forms that web through space and time. This new series is a set of certain stones—a motif that resonated through his earlier work—a collection of pigment and sediment whose attention rests on occupying its own hollow. But around its hollow a dance occurs, where many small phantom-like figures, their shadows, perpetually move through an ever-changing field of colorful reds, oranges, greens, yellows, and blues.